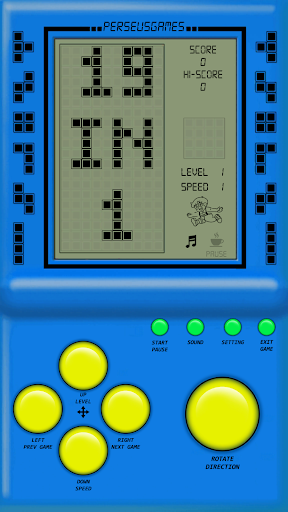 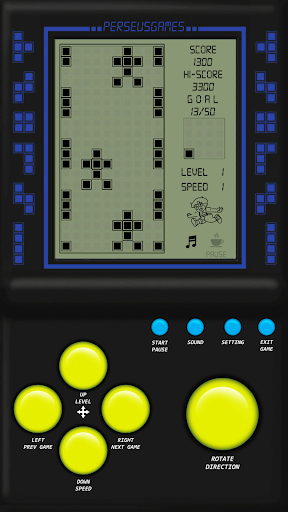 Brick Game is the compilation of the best games from the most popular console of the 1990s. Do you feel tired of with complicated and difficult games? Did you miss the favorite classic games? Let’s play this game to feel nostalgic!

Game list:
A – Brick Puzzle Classic:
Move and rotate the falling blocks. Lines are cleared when they are filled with blocks and have no empty spaces

B – Tank Classic:
Move tank and shoot bullet to kill enemy. The speed and intelligence of the enemy will increase after each level

C – Racing Classic:
Move racer left right to avoid enemy, the speed will be increase after each level

E – Supplement Shooting Classic:
Move the gun platform, shoot block to the sky to fill the falling blocks. When the blocks are filled, they will collapse upwards

F – Shooting Players Classic:
Move the gun platform, shoot to destroy the falling blocks before they touch the ground

G – Brick Breaker Classic:
Smash a wall of bricks by deflecting a bouncing ball with a paddle

I – Match Three Classic:
Change blocks of different shapes to match given blocks falling down

K – Brick Puzzle Classic III :
After brick fall down, all bricks will invisible

L – Brick Puzzle Classic IV :
After some bricks fall down, all bricks will move up 1 unit

M – Brick Puzzle Classic V :
Instead rotate brick, in this mode the brick can be exchange to other shapes

O – Racing Classic II:
Control the racer avoid all obstacles on the road. The speed will be increase after
each level

P – Ping Pong Classic:
Control the paddle to hit a ball back and forth and compete against with a computer-controlled opponent. The aim is reach ten points, points are earned when opponent fails to return the ball to the player.

Q – Racing Classic III:
Control racer avoid enemy in 3 lanes road, the speed will be increase after each level

R – Snake Classic II:
Move the snake to avoid obstacles, through 4 holes and eat more foods to grow in size