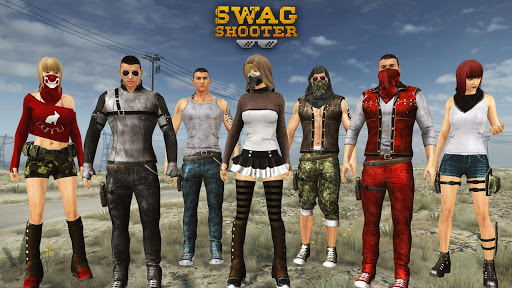 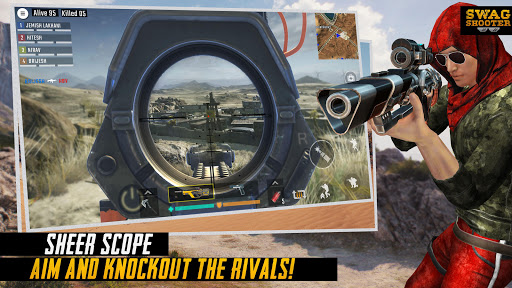 Conquer the action shooting war in the SWAGGY SURVIVOR style!!
Swag Shooter takes you to the swaggy journey on the survival battlegrounds. Experience the helicopter landing on the battlefield with 3 chances to survive till end. Fight against all the shooters with loaded guns to be the ultimate SWAG SHOOTER!!
Triumph the action shooting war by surviving in the shrinking play zone of the action fields. Defeat every player with specialized tactics and strategy to reach the best online and offline multiplayer game of the year.
Experience the thrilling action with high range armory, speedy vehicles and powerful explosives.

Brace yourself for the extreme FPS multiplayer war. Pull up your trigger, aim your target and shoot them to death. Experience the ultimate search and loot on the vast maps of new war games.
Enjoy the FPS war even in offline manner.

MODERN ARMORY IN STAGGERING ENVIRONMENT
● Wide range of scope including 2x, 4x and 6x giving high precision to the guns of Swag Shooter.
● Load up on modern weaponry like Sniper rifles, shotguns, machine guns, pistols, and launchers giving each player a distinct shooting experience of action games.
● It also serves high and low quality setting of map letting you play under every low end mobile device.
● The new swag characters to enhance the action, and each equipped with different powers to play in survival games.
● New and special hidden loot places to equip yourself fully in this special war shooter.

BATTLEGROUND SURVIVAL IN PvP MULTIPLAYER
● Create your private room and team up with your friends to fight against all other players in free battleground shooting game.
● Defeat opponents in team as well as individually in different modes in modern gun games.
● Challenge your friends worldwide into the best FPS action combat, Swag Shooter.
● Varied AI behavior makes each player unique and challenging to follow the rules of survival and take war games to victory.

SHOOTING IN THRILL ACTION ADVENTURE
● Rush into the Express trains to escape to the safe zone and explore the best FPS shooting game places.
● Boost your performance with Power Pack like acoustic armor, high jump and dynamic weaponry.
● Win the ultimate title “SWAGGER” and get amazing powers like storm survival power and enemy detector.
● Helicopter arrives at certain time intervals to open the biggest loot holes in the action gun games.
● Save yourself from the moving storm and firing turrets of the survival battlegrounds.
● Happy fireworks in form of rockets, to create the eye catching visual experience and a strategy of shooting games.

So, join the Swag Shooter, explore in swaggy way and be the ultimate Swagger. Turn the cold war into the blistering action war with your fire and gun shots.
Get through the enhancing standards of common battleground survival shooting games this new year by surviving to the fittest.
Experience full action adventure of the modern warfare on the hopeless land for epic Battle Royale Games.

Masha and the Bear: Climb Racing and Car Games 1.2.2